Junk Food Not to Blame for America’s Obesity Epidemic 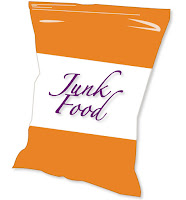 While these sugary and salt-laden foods may not be good for your health, the scientists found no significant difference in how much of these foods either overweight or normal weight people consumed – The real problem, according to the researchers: too many Americans eat too much.

“These are foods that are clearly bad for you and if you eat too much of them they will make you fat, but it doesn’t appear to be the main driver that is making people overweight and obese,” said lead researcher David Just, co-director of the Cornell Center for Behavioral Economics, in Ithaca, N.Y.

“For 95% of the country, there is no relationship between how much fast food and junk food they’re eating and their weight,” Just said. “Because of the bad habits we have, with all our food, just eliminating junk food is not going to do anything.”

But that doesn’t mean it’s OK to eat junk food. “These foods aren’t good for you,” he said. “There is no good argument for soda in your diet.”

Just said a broader approach is needed to fight the obesity epidemic. “We are eating too much generally. We need to cut back on our total consumption. We need to be better about exercising,” he recommended.

For the study, Just and his colleague Brian Wansink, director of the Cornell Food and Brand Lab, used the 2007-2008 National Household and Nutrition Examination Survey to analyze a sample of about 5,000 adults in the United States.

The researchers found that consumption of soda, candy and fast food was not linked to weight gain for 95% of the population. The exceptions are people who are on the extreme ends of the weight spectrum – those who are very underweight and those who are severely obese. These folks ate more fast food and fewer fruits and vegetables, the study revealed.

My Take:
I agree, Americans eat too much. However, if your definition of “junk food” is limited to soda, candy and fast food, you have skewed the study.

All the white, refined foods – pasta, breads, refined grains, potatoes, and baked goods are all “junk food”. They are empty calories providing excess fuel devoid of micronutrients (vitamins and minerals). Just because you eat them at home, doesn’t make them healthy.

This is the same science that considers French fries and ketchup as vegetables that comprise 38% of the average American’s vegetable intake annually.

No one ever gained weight by eating raw fruits and vegetables. Overweight vegetarians get that way from eating grains and “junk food” from Whole Foods. They just pay more for it.

The Bottom Line:
When I review a food journal, I look for 5 servings of vegetables, 2 fruits and 3 protein servings per day. I want 50% of the plant food to be raw and I want some healthy fats. That’s a diet that will promote ideal weight.